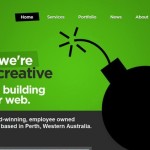 Why Colour Clashes Work in Design

Colour clashing is a very subjective thing. One person might think black and brown are hideous, and another might think

Creating a good and memorable website can be frustrating for website designers, They need a lot of inspiration to breed innovation and unlock their

Business card is one of the most common business tools in use to promote a products or services, it’s cheap and available

blue is one of the most popular and widely-used color in web design. This color has connotations like “sadness”, “patience”, “peace”, “magic”,

Flyer (Poster, Flier, Leaflet, Pamphlet) is one of the advertising media used to draw the attention of people and usually placed in

Website menu navigation is one of element that every website needs in order to create a usable web page, if you